Walter Blankenheim was born on the 30 August 1926 in Eisenberg/Pfalz. Between 1946–1954 he studied at the University for music (Hochschule für Musik) Stuttgart with Jürgen Uhde and Vladimir Horbowski and later in Paris with Marguerite Long. Further studies included courses with Geza Anda and Wilhelm Kempff. He won prizes in a number of competitions, including: Vercelli 1952 (2nd Prize), München – ARD 1952 and 1953 (Diplomas), Paris 1953 (Diploma), Casella 1954 (1st Prize). 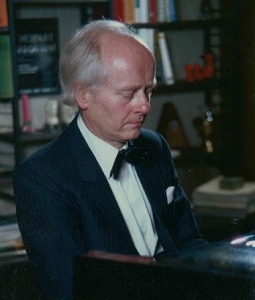 50 years of concert activity have taken Walter Blankenheim to Europe, Russia, the Middle and Far East, to the USA and to Latin America. He gave concerts as a soloist, chamber music partner and played many orchestral concerts. In Colombia alone he had been invited more than 30 times as a musician and also as a teacher.

Walter Blankenheim was also active as a teacher, being a professor of piano at the Hochschule für Musik Saar (Conservatorium of Music in Saarbrücken) where he led a piano class from 1963 – 1992. Invited as a juror in many competitions, he founded  the International Piano Competition J. S. Bach in 1990 together with his long-time student and colleague, Prof. Inge Rosar which took place in Saarbrücken, Germany for the first time in 1992 and has taken place every 3 years since then. www.bach-competition.de

While Walter Blankenheim was known as a Mozart interpreter until he was around 50, he has now become famous as a Bach specialist through decades of work with the works of J. S. Bach. His Bach concerts, master classes and Bach seminars have taken him to many countries.

His greatest life’s work consists in developing a deep understanding of the requirements for dealing with the neutral original text of the Bach works for piano. An understanding that shows itself concretely in how the neutral original text with its musical parameters of tempo, structure, articulation, ornaments, dynamics, figuration, inclusion of the pedals, especially the sostenuto pedal, etc. can be worked on, so that the interpreter first and later help the audience understand and enjoy the architecture and beauty of the work.

The dynamic flexibility of the modern piano is used to demonstrate terraced dynamics as well as support melodic lines by shaping them dynamically – what is heard by the audience as a “living structure” between “energy and relaxation”. Walter Blankenheim wrote an essay exploring these ideas, titled: Problems and Chances in the interpretation of J. S. Bach’s keyboard works on the modern piano (Bach days 1997: A series of concerts dedicated to the keyboard works of J. S. Bach in Saarbrücken, Germany).

His rich heritage is inherited from Prof. Inge Rosar and Dr. Kirill Monorosi in the Bach master classes, Bach seminars, with the solo and chamber music works by J.S. Bach and continued with the publication of the new edition Blankenheim/Rosar to young musicians.

Likewise, the cadenzas composed for many concerts by W. A. ​​Mozart and works by J. S. Bach as well as figurations of the suite sets and many others by him, Prof. Inge Rosar and Dr. Kirill Monorosi edited interpretative editions published by La Folia, Sydney, Australia. Recordings of the solo and chamber music

He recorded works from the Baroque to the 20th Century with different radio stations, such as the recording with Saarland Radio (Saarländischer Rundfunk) in Germany of the Six Partitas of J. S. Bach (Clavier-Übung I, BWV 825–830) in December 1996. Some of these radio recordings are now being released on CD.

For more information please see on this website: Recordings / CDs